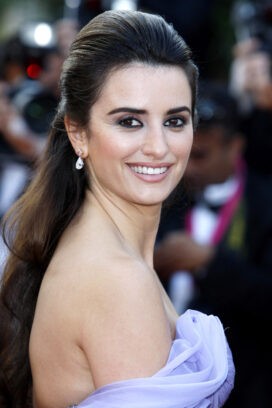 A sultry and sometimes playful Spanish actress, Penelope Cruz became famous internationally when she played the motion-sick heroine in the 2000 film Woman on Top. She was already a star in Spain: she had a major role in the Oscar-winning 1992 film Belle Epoque, then began a long association with Spanish director Pedro Almodovar. Her films with Almodovar include Live Flesh (1997), All About My Mother (1999) and Volver (2006). In Hollywood her most prominent roles have been in the westerns The Hi-Lo Country (1998) and All the Pretty Horses (with Matt Damon, 2000), the druglord drama Blow (with Johnny Depp, 2001), and Vanilla Sky (2001), in which she co-starred with her real-life boyfriend at the time, Tom Cruise. She won an Oscar as best supporting actress for her role as a fiery Spanish artist in Vicky Cristina Barcelona (2008, also starring Javier Bardem).

Cruz has the number “883” tattoed on her right ankle. When Newsweek magazine asked if it was true she had the tattoo, Cruz replied “It is true, but I never say why”… Cruz’s younger sister Monica Cruz (b. 1977) is also an actress… Penelope Cruz donated her salary from The Hi-Lo Country to Mother Teresa’s charity… Cruz and Tom Cruise dated from 2001 through 2004… Cruz is occasionally confused with the Mexican actress Salma Hayek.

Something in Common with Penelope Cruz