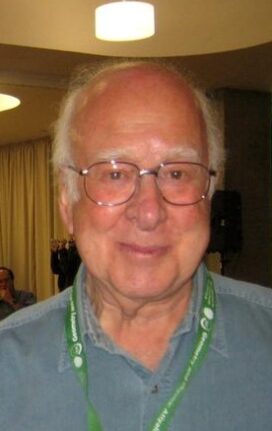 Peter Higgs is a theoretical physicist who in 1964 published the idea that subatomic particles gained mass by way of an as-yet-undiscovered particle (or field) that has since been called the Higgs boson. He was awarded the Nobel Prize in Physics in 2013 for his discovery. Peter Higgs grew up in Birmingham and Bristol, then went to King’s College in London in 1947. By 1954 he’d earned his doctorate and had moved to doing research at the University of Edinburgh. Higgs remained there as a mathematics professor from 1960 and 1980, and then from 1980 until his retirement in 1996 as a professor of theoretical physics. His theory of the missing boson drove physics research for decades, and on 4 July 2012 the European research center CERN (Centre Européen de Recherche Nucleaire) announced that they had maybe-yes-looks-like they’d finally found the elusive Higgs boson. It was one more critical step in understanding what’s called the Standard Model of how the universe works. Things are made of atoms, atoms are made of subtomic particles, which are made of even smaller things, none of which on their own have mass, just energy. So where does mass come from? Higgs (and several others) came up with the theory of particle interaction that explains how that happens. He shared the 2013 Nobel Prize with one of those other scientists, Francois Englert of Belgium. “This year’s prize is about something small that makes all the difference,” said Staffan Normark, permanent secretary of the Royal Swedish Academy of Sciences, in announcing their win.

The Higgs boson has also been called the “God particle,” a name that most scientists, including Peter Higgs, shun.

Something in Common with Peter Ware Higgs