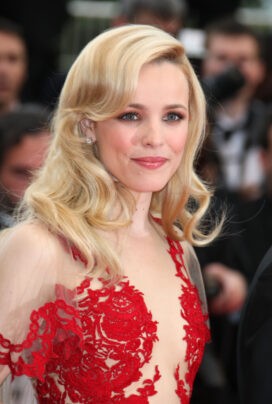 Official site of her 2005 movie

She talks about her movie roles in 2004

After only a handful of movie and TV roles, Rachel McAdams made a splash as Regina George, the catty teen villain in the 2004 comedy Mean Girls (starring Lindsay Lohan).

A graduate of York University (just outside Toronto), McAdams began her onscreen career in 2000. Mean Girls was the best and last of a string of roles in which McAdams played teen girls. Her impressive dramatic turn as Ryan Gosling‘s lover in The Notebook (2004, also starring James Garner) changed her status to rising star.

By the end of 2005 McAdams had indeed arrived, starring in three high profile movies: Red Eye (with Cillian Murphy), The Wedding Crashers (with Owen Wilson) and The Time Traveler’s Wife (2009). She also played brainy dame Irene Adler opposite Robert Downey, Jr. in the big-budget action movies Sherlock Holmes (2009) and Sherlock Holmes: A Game of Shadows (2011), as well as the uptight fiancee in Woody Allen‘s 2011 film Midnight in Paris.

Rachel McAdams’s other film credits include Southpaw (2015, starring Jake Gyllenhaal), and Spotlight (2015, directed by Tom McCarthy), and she starred in the second season of the cable series True Detective the same year, with Colin Farrell and Vince Vaughn.

Rachel McAdams for a time dated Ryan Gosling, her co-star in The Notebook; coincidentally, the two were born in the same hospital in the city of London in Ontario, Canada.

Something in Common with Rachel McAdams