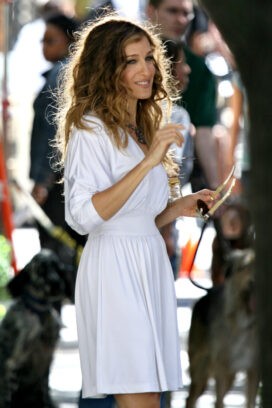 Actress Sarah Jessica Parker starred in the hit cable TV show Sex and the City from 1998-2004. Parker began acting professionally when she was eight years old, and by 1976 she was appearing in Broadway plays. In 1982 she landed a role in the television sitcom Square Pegs. Parker’s breakthrough role in the movies came as Steve Martin‘s co-star in the 1991 comedy L.A. Story; she followed that film with Honeymoon in Vegas (1992, with Nicolas Cage), the dramedy Ed Wood (2004, with Johnny Depp), and many other films. In 1998 she won the lead role in the frankly sexual cable television series Sex and the City. Parker played Carrie, the romance-happy diarist and leader of a group of four libidinous single women in Manhattan. The show co-starred Cynthia Nixon, Kim Cattrall and Kristin Davis and ran for six seasons on HBO. Parker then returned to feature film roles, including the ensemble comedy The Family Stone (2005, with Rachel McAdams and Diane Keaton), the romantic comedy Failure to Launch (2006, with Matthew McConaughey), and Sex and the City feature films in 2008 and 2010.

Parker married actor Matthew Broderick, in 1997. They have three children: son James Wilkie Broderick (b. 2002) and twin daughters Marion Loretta Elwell Broderick and Tabitha Hodge Broderick (b. 2009). The twins were born via a surrogate mother… Parker twice won Emmy Awards as outstanding lead actress in a comedy series for Sex In The City: in 2001 and 2004… In the show her on-and-off boyfriend, Mr. Big, was played by Chris Noth of Law & Order fame… Parker was one of several actresses to play the title role during the original Broadway run of Annie… Her brother, Timothy Britten Parker, is also an actor.

Something in Common with Sarah Jessica Parker