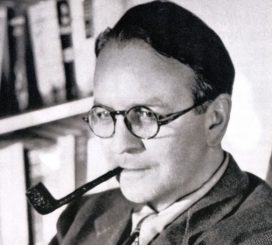 Raymond Chandler was a writer of detective stories and a founder (with Dashiell Hammett and James M. Cain) of the hard-boiled school of mystery fiction. His detective hero Philip Marlowe, a tough and handsome urban loner, was much imitated by other mystery writers and in film noir movies.

Raymond Chandler didn’t begin writing seriously until he was nearly 45 years old; from 1922 to 1932 Chandler was an accountant and manager for the Dabney Oil Syndicate in Los Angeles. (Nearly all of the Marlowe stories were set in Los Angeles, considered an unusual setting at the time.)

Chandler’s early short stories were published in pulp magazines like Black Mask and he later wrote seven complete novels, the most famous of which are The Big Sleep (1939), Farewell, My Lovely (1940) and The Long Goodbye (1953).

He also did some writing for films, including Billy Wilder’s Double Indemnity (1944, based on Cain’s novel) and Alfred Hitchcock‘s Strangers On A Train (1951). Raymond Chandler was given the Edgar Allan Poe Award by the Mystery Writers of America in 1946 and 1954.

Raymond Chandler fought with the Canadian Army in World War I… His wife, Cissy, was 18 years older than Chandler; they had no children… Months after her death he attempted suicide (by pistol) but failed… Raymond Chandler’s unfinished novel Poodle Springs was completed by mystery writer Robert B. Parker in 1989.

Something in Common with Raymond Chandler