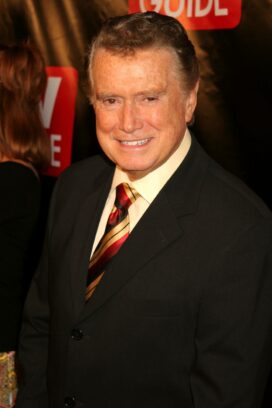 TV veteran Regis Philbin was the host of a long-running morning show that bore his name from 1988-2011, and the longtime host of the American version of the TV game show Who Wants to Be a Millionaire?

Regis Philbin graduated from Notre Dame University in 1953, and after a stint in the U.S. Navy, he got right into television. He became an upbeat jack-of-all-trades, hosting local and national shows of all kinds. That run included a stint as sidekick to Joey Bishop on the comedian’s late-night talk show from 1967-69.

Philbin’s morning show Live With Regis and Kathie Lee debuted nationally on ABC in September of 1988. It became his signature show, with Philbin’s energy and gift of gab keeping things rolling on for years. “In a daytime landscape filled with bland, polished hosts and smarmy good cheer, Mr. Philbin was crumpled, nasal and histrionic,” said the New York Times in 2011. “He was a snaggle-tooth amid cosmetic dentistry and porcelain veneers.” The Hollywood Reporter called Philbin “indefatigable and downright neighborly.”

His co-host Kathie Lee Gifford left the show in 2000 and was replaced by Kelly Ripa; renamed Live With Regis and Kelly, the show kept going strong until Philbin stepped down with a final show on November 18, 2011. His jolly personality made him a regular guest on other shows, and Philbin for many years enjoyed an ongoing played-for-laughs rivalry with late-night host David Letterman.

Regis Philbin was married to the former Catherine Faylen from 1955 until their divorce in 1968. They had two children, Amy and Daniel. Phibin then married Joy Senese in 1970, and they have two children, Joanna and Jennifer (who is known as J.J.)… Regis Philbin had triple-bypass surgery in 2007 and a hip replacement in 2009… Regis Philbin had small roles in the movie The Bad News Bears Go to Japan (1978) and on the TV soap opera Ryan’s Hope (1987-88)… Regis Philbin was succeeded as host of Millionaire by Meredith Vieira, although he returned later for stints as host in 2004 and 2009.

Something in Common with Regis Philbin