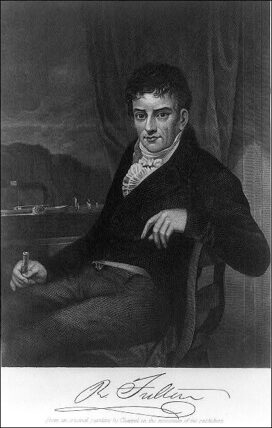 Robert Fulton is popularly, if inaccurately, considered the inventor of the steamship. Born in Pennsylvania, he began his career as an artist, painting mostly portraits (Benjamin Franklin sat for him in Philadelphia). In 1786 he travelled to England, where he put his efforts to engineering, specializing in canal navigation and shipbuilding. In the late 1790s he worked on designing and building a submarine, first in France and then, more successfully, in England. Something of a celebrity when he returned to the United States in 1806, Fulton set to building a ship powered by an English-built steam engine. In August of 1807 his Clermont made the trip from New York to Albany, upriver on the Hudson, in 32 hours. Although John Fitch had built a working steamboat in 1790, Fulton was the first to establish a commercially successful line of ships, which led to a transportation revolution. After Clermont he built more than a dozen other steamships, a torpedo boat and, under the direction of the U.S. Congress, a steam-powered frigate.

Something in Common with Robert Fulton