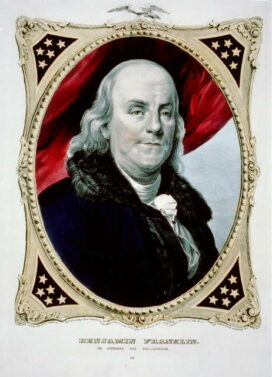 Benjamin Franklin was a hero of Colonial America and a man of amazing talents. He is still considered to be among the brainiest of the “Founding Fathers” of the United States.

Franklin’s achievements are too varied to sum up easily. They include signing the Declaration of Independence, publishing the famous Poor Richard’s Almanack, serving as postmaster of Philadelphia, founding the first American fire insurance company, living in Paris as American ambassador to France, and inventing useful objects like the lightning rod, the Franklin stove, and bifocal glasses.

Benjamin Franklin was born in Boston but at age 17 moved to Philadelphia, where he worked as a printer, wrote pamphlets on public issues, and eventually bought The Pennsylvania Gazette.

By 1732 he was publishing Poor Richard’s Almanack, a blend of practical information, humor, and homilies like “A penny saved is a penny earned.”

He grew into Philadelphia’s most famous citizen: a blend of businessman, inventor, philosopher, public planner, and civic cheerleader.

As the Revolutionary War approached, Ben Franklin wrote many pamphlets promoting union among the colonies; he was a Pennsylvania delegate to the Continental Congress, then spent much of the war in France as a diplomat, charming America’s French allies.

Franklin helped negotiate and write the 1783 Treaty of Paris, which ended the Revolutionary War, and in 1787 he signed the new U.S. Constitution.

During all these years he never lost his interest in science, and in particular spent years studying electricity. In a famous 1752 experiment, he flew a kite with a key attached to prove that electricity exists in the atmosphere.

His personal memoirs were published after his death as The Autobiography of Benjamin Franklin.

Ben Franklin coined dozens of popular sayings, including “Early to bed and early to rise, makes a man healthy, wealthy and wise” and “In this world nothing can be said to be certain, except death and taxes.”

Something in Common with Benjamin Franklin