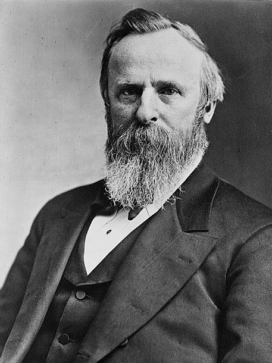 Good solid entry on his Ohio years, plus a general background

A Visit to Hayes's Grave

If you're a presidents buff, you should see this

Rutherford B. Hayes served as president of the United States from 1877-1881 after being declared the winner of the disputed election of 1876. Rutherford B. Hayes was an Ohio lawyer who joined the Union Army during the Civil War. He was elected to the U.S. House of Representatives in 1864, while still on active duty in that war, and then re-elected in 1866. He resigned in July of 1867 in order to run, successfully, for the post of governor of Ohio. He was governor from1868-72 — two two-year terms — before retiring. But in 1875 he again was elected governor. The very next year the Republican Party nominated him for U.S. president. Although Hayes’s opponent, Democrat Samuel J. Tilden, received 51% of the popular vote, the electoral votes from four states were in dispute. After much haggling, a special Congressional commission gave the election to Rutherford B. Hayes just three days before his inauguration. In turn, President Hayes removed Federal troops from the South. Hayes served only one term and did not run for re-election. He was succeeded in 1881 by President James Garfield.

Rutherford B. Hayes was the 19th president of the United States…. His wife, First Lady Lucy Ware Webb Hayes, was known as “Lemonade Lucy” because of her strict policy against serving alcohol in the White House.

Something in Common with Rutherford B. Hayes