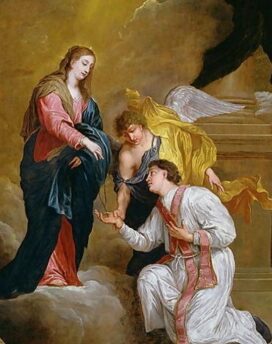 Saint Valentine, according to romantic legend, was a kind-hearted Roman priest who married young couples against the wishes of Emperor Claudius II. For these deeds he was said to have been beheaded on the 14th of February. Today he is the namesake of the romantic holiday known as Valentine’s Day.

The true origins and identity of St. Valentine are not really known. According to the Catholic Encyclopedia, “At least three different Saint Valentines, all of them martyrs, are mentioned in the early martyrologies under the date of 14 February.”

Two of these men lived in the third century A.D., one being the bishop of Interamna (now Terni, Italy) and the other being a priest of Rome. (Some speculate that these two figures were actually the same man.) Both seem to have been persecuted for their beliefs; the Roman priest reportedly was beaten and then beheaded on the orders of Emperor Claudius II, on or about the year 270.

Legends vary on how the martyr’s name became connected with romance: the date of his death may have become mingled with the feast of Lupercalia, a pagan festival of love, or with the ancient belief that birds first mate in the middle of February.

In modern times, Valentine’s Day (on February 14th) is a day of special romantic sentiment and gift-giving among lovers.