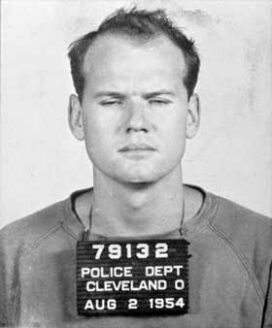 Dr. Sam Sheppard was a young, successful physician in a suburb of Cleveland, Ohio before he was the subject of a nationally famous murder trial.

On July 4, 1954, his pregnant wife Marilyn was brutally murdered in the bedroom of their home in Bay Village, Ohio. Dr. Sam Sheppard was soon arrested and charged with her murder. He had been home at the time of the murder but maintained his innocence, claiming he’d wrestled with a “bushy-haired stranger,” was knocked unconscious, and woke up to find his wife dead.

The trial, which took two months from October-December of 1954, was a national sensation. Sheppard was convicted of murder, and spent 10 years in prison before his conviction was overturned on appeal. In 1966 he was retried and this time, was found not guilty.

Yet so much for freedom: he spent his last years battling booze and appearing as “Killer Sheppard” in professional wrestling matches. He was only 46 when he died of liver failure in 1970.

The Sam Sheppard case is said to have been the inspiration for the TV series The Fugitive (1963-67), in which the wrongly-accused Dr. Richard Kimble hunted the mysterious one-armed man who had killed his wife. Kimble was played by actor David Janssen in the TV series, and by Harrison Ford in the 1993 feature film The Fugitive… Sam Sheppard is no relation to Sam Shepard (1943-2017), the actor and playwright.

Something in Common with Sam Sheppard