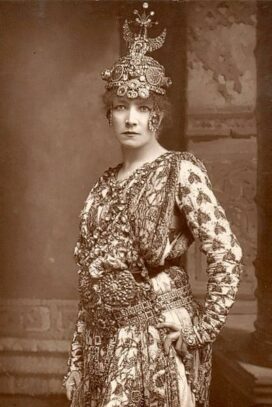 French stage star Sarah Bernhardt was probably the most famous actress of the 19th century. She studied drama in Paris and began performing on the stage in the early 1860s. She soon became known for her charismatic, sensual and highly melodramatic performances in classical plays such as Ruy Blas (1872) and Phedre (1874). Bernhardt began touring internationally in 1880, travelling in special luxury railway cars and appearing for big money in cities across Europe and the United States. Although she is chiefly remembered as a star of the stage, her roles in the early days of cinema helped bring credibility to the new medium. Her most famous films are 1911’s La Dame aux Camelias (better known to U.S. audiences as Camille) and 1912’s Queen Elizabeth. She injured her right leg in 1905 and in 1915 the leg was amputated, but Bernhardt continued to tour and perform. She died in 1923 shortly after beginning the filming of La Voyante.

The exact day of Bernhardt’s birth is unclear; many sources list October 22nd, 23rd or 25th as the correct date, but there seems to be no proof for any individual date… Bernhardt is one of the few women to play the lead role in William Shakespeare‘s Hamlet… She published an autobiography, My Double Life, in 1907, and wrote The Art of Theatre in 1923.

Something in Common with Sarah Bernhardt