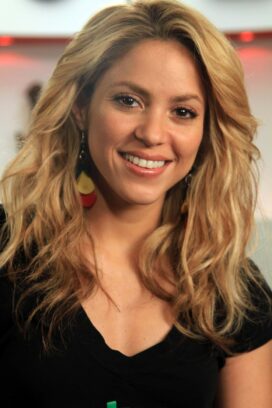 Shakira is the Colombian singer/songwriter whose album Pies Descalzos (1995) spawned several hit singles, including “Estoy Aqui” and “Donde Estas Corazon” and helped her to eventually achieve international stardom as the “Queen of Latin Music.”

Most American listeners know her for her early hits, “Whenever, Wherever” and “Hips Don’t Lie.”

In 1998 Shakira released Dónde Están Los Ladrones, a popular and critical success and the beginning of a close working relationship with producer Emilio Estefan and his wife Gloria.

Mixing her South American background and Middle Eastern heritage with catchy pop tunes and made-for-MTV looks, Shakira rapidly became an international star and one of the top Latin recording artists of the 1990s. In 2001 she released her first album with English lyrics, Laundry Service, which included the hit “Whenever, Wherever.”

Shakira’s fans call her “Shaki”… She is widely known as a spokesperson for Pepsi Cola… Some sources list her birthdate as 9 February rather than 2 February.

Something in Common with Shakira