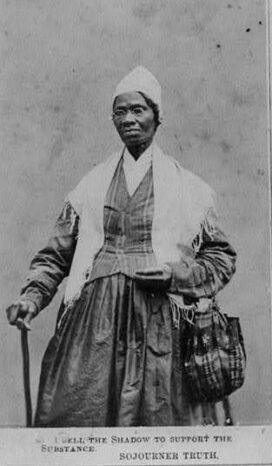 Sojourner Truth began life as a slave and ended it as a celebrated anti-slavery activist.

Sojourner Truth was born into slavery in New York and was sold several times before escaping to freedom with an infant daughter in 1827. She worked as a housekeeper, lived in a religious commune, and eventually became a traveling speaker and preacher. Prompted by religious feelings, she changed her name to Sojourner Truth in 1843.

Although she could not read or write, Sojourner Truth was a captivating speaker: she reportedly stood nearly six feet tall and was a spirited evangelist who spoke out for women’s rights and against slavery. Her memoir The Narrative of Sojourner Truth (as told to author Olive Gilbert) was published in 1850 and helped establish her more widely in the public mind.

The next year, at a women’s rights convention in Akron, Ohio, she gave her famous speech, “Ain’t I A Woman,” a short but stirring challenge to the notion that men were superior to women. During the Civil War she worked to support black Union soldiers, and after the war she continued to travel and preach on spiritual topics and as an advocate for the rights of blacks and women.

Sojourner Truth was a friend of Harriet Beecher Stowe, the author of Uncle Tom’s Cabin. Stowe wrote an introduction to The Narrative of Sojourner Truth.

Something in Common with Sojourner Truth