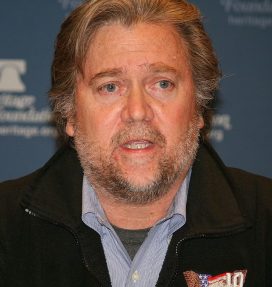 Steve Bannon is the Breitbart News executive who in 2016 emerged as a key advisor to Donald Trump during Trump’s successful run for president — and who was later indicted twice for money laundering and fraud while raising money to build a wall on the border with Mexico.

Steve Bannon was already a highly controversial figure before joining the Trump campaign. In the mold of his friend and fellow conservative activist Andrew Breitbart, Bannon was a lover of fierce political argument, and seemed determined to demolish liberals and establishment figures of all kinds. VICE News called him “a right-wing Rottweiler.”

Stephen Bannon was born in Virginia and earned his undergraduate degree from Virginia Tech in 1976. After graduation from Virginia Tech he joined the U.S. Navy, serving on destroyers and then as a special assistant to the chief of Naval operations at the Pentagon. (While there he earned a master’s degree in international studies from Georgetown University in night school.)

Leaving the Navy, he entered Harvard Business School in 1983 and after graduation landed a job with the investment bank Goldman Sachs. He then started his own media investment firm, Bannon & Company; while there he served as a dealmaker for the sale of Castle Rock Entertainment, and in return received royalties from the TV show Seinfeld. The royalties added to his wealth and the dealmaking gave him a foothold in Hollywood.

Bannon met Andrew Breitbart after producing In The Face of Evil, a 2004 film praising Ronald Reagan. Throughout the next 10 years Bannon backed a series of conservative documentaries, praising Sarah Palin in The Undefeated (2011) and attacking Hillary Clinton in Clinton Cash (2016) among other topics. He founded the Government Accountability Institute, a right-wing activist think tank that heavily attacked Hillary Clinton in the 2016 presidential race.

After Andrew Breitbart’s sudden death in 2012, Bannon was named executive chairman of Brietbart News. Taking a very active role, he encouraged nationalist and and anti-establishment stories; under his watch, Breitbart News became aligned with “alt-right” extremists, a loose coalition of far-right groups with ties to white nationalism and antisemitism. As the site’s profile rose, so did Bannon’s, especially as Breitbart News threw its support behind Donald Trump’s run for president.

In August of 2016, Bannon left his job at Breitbart when Donald Trump named him the chief executive of his presidential campaign; when Trump scored his surprising win that November, Bannon was appointed Trump’s senior counsel and chief strategist. He left the role less than a year later.

In 2020, Steve Bannon was charged with fraud and money laundering in connection with We Build the Wall, a fundraising group that professed to be dedicated to building a border wall between the US and Mexico. Bannon was charged with misusing more than $1 million of the money for his own purposes. On January 20, 2021, hours before leaving office, Donald Trump outrageously issued a pardon for Bannon on all federal charges.

In August of 2022, Steve Bannon was freshly indicted by the Manhattan District Attorney’s office of the state of New York on similar charges related to We Build The Wall scheme. Because these were state charges, not federal, the presidential pardon does not apply.

Steve Bannon’s fondness for casual dress is well-known. “With his swept-back blond hair and partiality to cargo shorts and flip-flops, he looks like Jeff Spicoli after a few decades of hard living,” said Bloomberg News in 2015… Steve Bannon has been married and divorced three times: to Cathleen Houff Jordan (their daughter, Maureen, is a West Point graduate); to fellow investment banker Mary Louise Piccard (married in 1995 and divorced in 1997; they had twin daughters); and to Diane Clohesy (marriage date unclear, divorced in 2009).

Something in Common with Steve Bannon