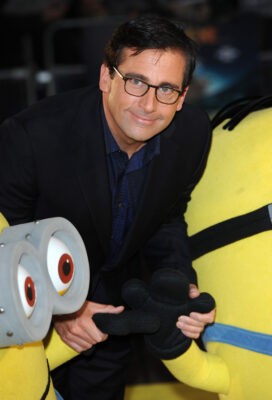 Steve Carell is the Emmy-nominated comedian who played nebbishy manager Michael Scott on the hit American television series The Office from 2005 to 2011.

Steve Carell first gained wide notice when he appeared regularly on The Daily Show from 1999 and 2005. He then had small parts in the hit comedy films Bruce Almighty (2003, starring Jim Carrey) and Anchorman: The Legend of Ron Burgundy (2004, starring Will Ferrell). The Office, based on the U.K. series by Ricky Gervais, began in the spring of 2005, and featured Steve Carell as the humorously clumsy and obtuse office manager of the paper company Dunder Mifflin.  He was Emmy-nominates as outstanding lead actor in a comedy series every year from 2006-11, but never won.

Carell really broke through when he co-wrote and starred in the 2005 Judd Apatow hit film The 40 Year-Old Virgin. His success on TV and in the movies moved Carell from bit parts to leads, and he has since appeared in a number of high-profile comedies, including Little Miss Sunshine (2006, with Alan Arkin), Dan in Real Life (2007, with Juliette Binoche), Date Night (2009, opposite Tina Fey), as the voice of the villainous hero Gru in the animated features Despicable Me (2010) and Despicable Me 2 (2013), and the financial drama The Big Short (2015, with Ryan Gosling). He was Oscar-nominated as best actor for his 2014 drama Foxcatcher.

Steve Carell is married to actress Nancy Walls, who appeared in The Office as recurring character Carol Stills… Steve Carell left The Office in 2011; the show ran for two more seasons, and Carell returned for the show’s finale in 2013.

Something in Common with Steve Carell