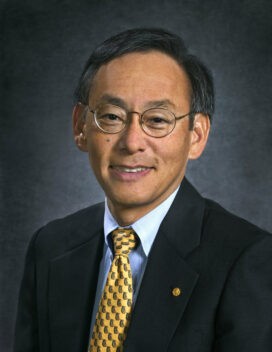 Steven Chu is the Nobel-winning scientist who became U.S. Secretary of Energy in 2009. Chu comes from a science-minded family: his father, Ju Chin Chu, moved from China to attend the Massachusetts Institute of Technology in 1943, and his mother and brothers all have advanced degrees. Chu earned undergraduate degrees in math and physics from the University of Rochester (1970), a Ph.D. in physics from Cal Berkeley (1976), and then did post-doctoral work at Berkeley until 1978, when he joined Bell Labs. He became a professor at Stanford University in 1987. His work there won him the 1997 Nobel Prize in Physics “for development of methods to cool and trap atoms with laser light” — in essence, using light to slow atoms so they can be studied. By the time he became director of the Lawrence Berkeley National Laboratory (known as the Berkeley Lab) in 2004, Chu had turned his attention to the problems of global warming, carbon emissions and and new forms of energy. As Secretary of Energy under President Barack Obama he will replace Samuel Bodman, who has held the job since 2005 under George W. Bush.

Chu shared his Nobel Prize with Professor Claude Cohen-Tannoudji of the Collège de France and Dr. William D. Phillips of the U.S. National Institute of Standards and Technology… Chu married Dr. Jean Fetter (now Jean Chu) in 1997… He has two sons from his previous marriage to Lisa Chu-Thielbar: Geoffrey (born circa 1981) and Michael (born circa 1984)… His brother Gilbert Chu is a professor and researcher at Stanford University Medical School.

Something in Common with Steven Chu