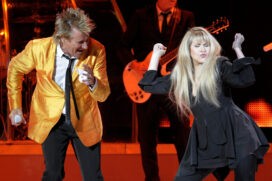 Stevie Nicks began performing at an early age, and in the late 1960s and early ’70s she and her partner, Lindsey Buckingham, were fixtures in the local music scene in California.

In 1973 they released their first album, a financial flop that caught the attention of the band Fleetwood Mac. Buckingham and Nicks joined the band in 1974, and a year later Fleetwood Mac’s self-titled album was a success.

In 1977 Fleetwood Mac released Rumours, a hit-packed album that set records for sales.

Singer Nicks released a solo album in 1981, Bella Donna, that showed she was a star in her own right.

From then on, she performed with Fleetwood Mac and also released solo albums, recording hits such as “Gypsy,” “Stand Back” and “Stop Draggin’ My Heart Around” (with Tom Petty).

Her on-again, off-again relationship with Fleetwood Mac continued on through the 1990s, and in 2001 she released another solo album, Trouble in Shangri-La.

With Fleetwood Mac, Nicks performed at the first inauguration of U.S. president Bill Clinton in 1993, and again at a farewell party for him in 2001.

Something in Common with Stevie Nicks