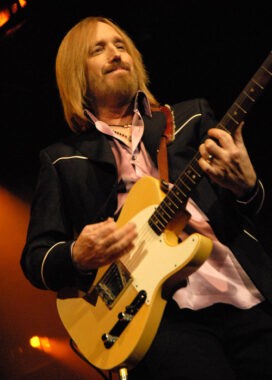 Tom Petty was the front man and songwriter for Tom Petty and the Heartbreakers, the rock band whose hits from the 1970s and 1980s included “Breakdown,” “Don’t Do Me Like That” and “Free Fallin’.”

Tom Petty and his fellow band members got started in their home state of Florida, but in the mid-1970s they headed to Los Angeles to make records. Their 1976 debut eponymous album included the songs “Breakdown” and “American Girl,” and the band became a hit in the U.K. By the time their second album was released in 1978 (You’re Gonna Get It), their first record was making the charts in the U.S.

The success of 1979’s Damn the Torpedoes (with hits such as “Refugee”) catapulted them from the nightclub circuit to sold-out arenas, as people flocked to Petty’s jangly, loose-limbed rock and lyrics that were by turns witty, bitter and bemused. In the late ’80s Petty did solo work (1989’s Full Moon Fever was a top seller) and collaborated with George Harrison, Bob Dylan, Roy Orbison and Jeff Lynne in the band The Traveling Wilburys.

Tom Petty was inducted into the Rock and Roll Hall of Fame in 2002. His long string of hits as a solo artist and with the Heartbreakers also included “Don’t Come Around Here No More” and “Into the Great Wide Open.” He also had a hit with Stevie Nicks in 1981 with the single “Stop Draggin’ My Heart Around.”

Tom Petty died at his home in Malibu, California on October 2, 2017, just a few days after completing a 40th anniversary tour with The Heartbreakers. At first the cause of death was reported as a heart attack, but early in 2018 the coroner announced his cause of death as an accidental drug overdose; drugs including fentanyl, oxycodone, temazepam, alprazolam, citalopram, acetyl fentanyl and despropionyl fentanyl were found in his system.

In a Facebook post the same day, his family said that “Unfortunately Tom’s body suffered from many serious ailments including emphysema, knee problems and most significantly a fractured hip.” They continued, “On the day he died he was informed his hip had graduated to a full on break and it is our feeling that the pain was simply unbearable and was the cause for his over use of medication.”

Tom Petty was married to the former Jane Benyo from 1974 until their divorce in 1996. They had two daughters, Adria and AnnaKim Violette… Tom Petty then married Dana York Epperson in 2001… Tom Petty and his band played at halftime of Super Bowl XLII in 2008.

Something in Common with Tom Petty