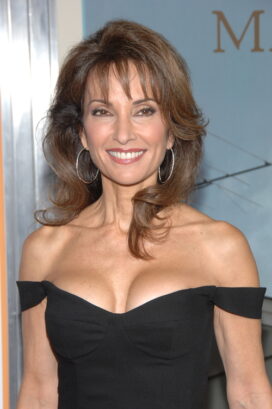 Susan Lucci began playing Erica Kane on the soap opera All My Children in 1970. As played by Lucci, Kane was a slinky, sneaky temptress and soon became the show’s signature schemer.

As the years went by and Susan Lucci became the grande dame of American soap operas, she also became famous for something else: being nominated for Emmy Awards without winning. Lucci was nominated for the daytime Emmy as best actress 19 times in a row before finally, triumphantly, winning in 1999. She was nominated twice more without winning, making her total tally 21 nominations and 1 win, before All My Children was finally canceled by ABC in 2011.

Susan Lucci later hosted the docudrama series Deadly Affairs (2012-14) and had a recurring role on the soapy comedy-drama Devious Maids (2013-16). She has also starred in a string of breathless TV movies, including Mafia Princess (1986), The Bride in Black (1990), Seduced and Betrayed (1995) and Blood On Her Hands (1998). Lucci appeared on the 2008 edition of the TV show Dancing With The Stars, with competitors including Cloris Leachman and Kim Kardashian.

Susan Lucci was given a star on the Hollywood Walk of Fame in 2005. Her 2011 autobiography was titled All My Life.

Susan Lucci is not the daughter of comedienne Phyllis Diller, despite long-running Internet rumors. The two are unrelated… Some sources list her birth year as 1947, but 1946 is generally accepted as her correct year of birth. Lucci is tight-lipped about her age, but it is known that she graduated from high school in 1964… Susan Lucci married the chef Helmut Huber in 1969. They have two children: daughter Liza Huber (born 1975) and son Andreas (born circa 1980). Liza Huber was an actress on the soap opera Passions (1999-2008); Andreas Huber played golf at Georgetown University and was briefly a pro golfer on the Canadian PGA Tour and European Challenge Tour… Susan Lucci is 5’1″ tall, according to CelebHeights.com. Lucci told Women’s Health in 2018 that she was “five foot two on a good day.”

Something in Common with Susan Lucci