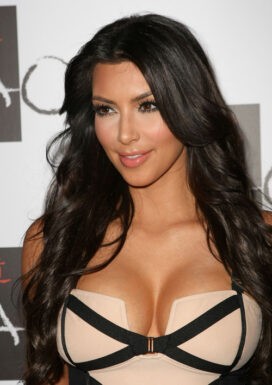 Kimberly Kardashian is a Los Angeles socialite, businesswoman and star of the long-running reality TV show Keeping Up With the Kardashians.

Kim Kardashian first came to wide public attention through her friendship with socialite Paris Hilton; Kim is also the daughter of attorney Robert Kardashian (1944-2003), who became famous in 1994 when his friend and client O.J. Simpson was arrested and tried for murder.

Kim Kardashian became one of Paris Hilton’s party pals and then in 2007 boosted her profile by taking legal action to prevent the distribution of a naughty home video she had made with then-boyfriend Ray J (born William Ray Norwood, Jr., the brother of singer Brandy). The tape was widely distributed on the Internet, despite (or because of) Kardashian’s attempts to quash it, and she was launched into Hilton-like celebrity.

That led to the 2007 launch of the TV reality show Keeping Up With the Kardashians, which starred Kim and her sisters Kourtney and Khloe and made their extended family synonymous with celebrity for its own sake.

Kim appeared on Dancing With the Stars (2008) and made various appearances on other TV shows. She and her sisters opened a chain of dress boutiques called Dash, and together they published a memoir, Kardashian Konfidential, in 2010.

She published a 352-page book of selfies, titled Selfish, in 2015, and made social media part of her business empire. Kardashian has proven herself to be a savvy business mind in several areas; her shapewear line, Skims, launched in 2019 to great acclaim. In 202, Kardashian sold a 20% stake in her brand KKW Beauty for $200 million to the international cosmetics brand Coty.

Kim Kardashian is the former step-daughter of Caitlyn Jenner, who as Bruce Jenner was an Olympic gold medalist in 1976. Kim’s mother Kris was married to Jenner from 1991 until their divorce in 2015, the year Caitlyn Jenner transitioned to her female identity.

Something in Common with Kim Kardashian