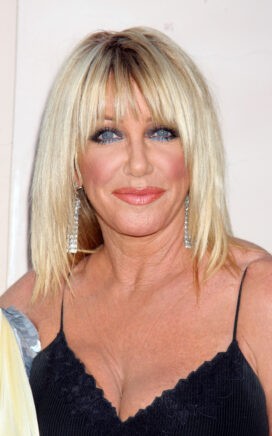 Suzanne Somers is the actress, author and alternative health advocate who is best known for her years on the TV sitcom Three’s Company.

Suzanne Somers was born in the San Francisco Bay area and eventually migrated south to Hollywood. In the 1970s she had bit parts in movies and TV, most notably in the role of the mysterious blonde in the Thunderbird pursued by Richard Dreyfuss in the 1972 movie American Graffiti.

In 1977 she broke through as the silly Chrissy Snow on the TV sitcom Three’s Company. Considered racy for its day, the sitcom featured Somers sharing a co-ed apartment with roommates Janet Dawson (Joyce DeWitt) and Jack Tripper (John Ritter); the show ran from 1977-1984, with Somers appearing from 1977-80 and becoming a star in the process. She was typecast to an extent as a Big Blonde in TV movies like Zuma Beach (1978) and Hollywood Wives (1985).

Her TV and movie career faded, but in the 1990s Somers re-emerged as an infomercial spokeswoman for an exercise product called the Thighmaster, then developed her own line of diet and exercise products. Somers announced in 2001 that she had breast cancer. She was treated successfully with a lumpectomy and radiation, but the experience led her to become an advocate for alternative cancer therapies, hormone therapies and alternative health treatments in general.

Suzanne Somers has written more than a dozen books, including Ageless: The Naked Truth About Bioidentical Hormones (2006), Suzanne Somers’ Slim and Sexy Forever (2008), Stay Young & Sexy with Bio-Identical Hormone Replacement (2009), and TOX-SICK: From Toxic to Not Sick (2015).

Suzanne Somers played herself in the 1991 TV movie Keeping Secrets, an account of her childhood with an alcoholic and abusive father… Suzanne Somers has been married two times: to Bruce Somers (from 1965 until their divorce in 1968), and to producer Alan Hamel (in 1977). She has one child with Somers, named Bruce Jr., born in 1965.

Something in Common with Suzanne Somers