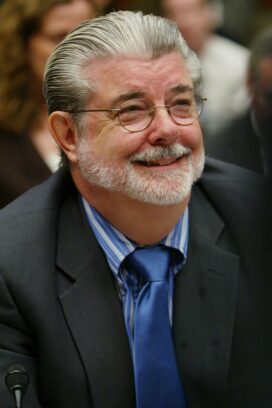 The Star Wars films of George Lucas have made him one of the most successful moviemakers in history.

A 1967 graduate of the film school at USC, George Lucas was still in his 20s when he co-wrote and directed American Graffiti (1973, with Ron Howard), the film that kicked off a country-wide craze for 1950’s nostalgia. With his clout from that success he made Star Wars, a slam-bang space adventure which broke box office records around the world in 1977. He oversaw five sequels, including The Empire Strikes Back (1980), Return of the Jedi (1983), The Phantom Menace (1999), Attack of the Clones (2002) and Revenge of the Sith (2005).

George Lucas sold the entire Lucasfilm empire to the Walt Disney Company in 2012 for a reported $4.05 billion; the deal included the rights to the Star Wars and Indiana Jones films as well as Lucasfilm Ltd. and his other filmmaking-related companies. “It’s now time for me to pass Star Wars on to a new generation of filmmakers. I’ve always believed that Star Wars could live beyond me, and I thought it was important to set up the transition during my lifetime,” Lucas said after the sale. Disney immediately announced plans to make more Star Wars films; the first, Star Wars: The Force Awakens, was released in 2015.

George Lucas’s wife Marcia edited American Graffiti and the original Star Wars; the couple were married from 1969-83. Marcia Lucas won an Oscar for editing on the original 1977 Star Wars… George Lucas married businesswoman Mellody Hobson (born 1969) on June 22, 2013. Their daughter, Everest Hobson Lucas, was born via surrogate on August 9, 2013… George Lucas has three other children: A daughter Amanda Lucas (adopted in 1981 with Marcia Lucas), and daughter Katie (b. 1988) and son Jett (b. 1993). Lucas adopted Katie and Jett as a single parent… George Lucas has never won a competitive Academy Award. He was Oscar-nominated as both writer and director for American Graffiti and Star Wars, but did not win either Oscar for either film. However, Lucas was given the Irving G. Thalberg Award for Lifetime Achievement by the Academy in 1991. Also, his firm Industrial Light and Magic won dozens of Oscars and awards for technical achievements between its founding in 1975 and its sale to Disney in 2012.

Something in Common with George Lucas