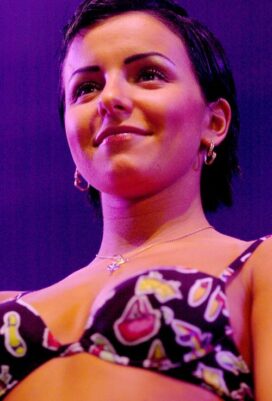 The brainchild of manager/video director Ivan Shapovalov, t.A.T.u. (pronounced “tattoo”) was a Russian singing duo made up of Yulia “Julia” Olegovna Volkova (b. 20 February 1985) and Elena “Lena” Sergeevna Katina (b. 4 October 1984). They were a pop sensation in Russia from their beginnings in 2000, thanks to savvy packaging and snappy pop songs. Dressed in schoolgirl uniforms, the teenagers (Lena’s the redhead, Julia’s the brunette) appeared on stage and in public as “lesbian” lovers, kissing each other every chance they got and being generally sassy. The true nature of their relationship was part of the mystery and hype of the package, but they made the charts on the strength of catchy pop singles. Their first album, 200 Po Vstrechnoi (200 km/hr In The Wrong Lane) was a top hit in Russia in 2001. On the strength of their videos and hit songs such as “Ya Soshia S Uma” (“All the Things She Said”) and “Nas Ne Dagoniat” (“Not Gonna Get Us”), they carried their popularity internationally and re-released 200 km/hr in English in 2002, making the leap from stars on MTV Russia to stars on MTV in the United States. Following the success of their first album and tour, they cast aside their manager and their lesbian façade and in 2005 released albums in English and Russian, Dangerous and Moving and Lyudi Invalidy. They released a third album in 2008 (Vesyolye Ulybki, or Waste Management), but in 2011 announced they were breaking up the band to pursue solo projects.

Something in Common with t.A.T.u.