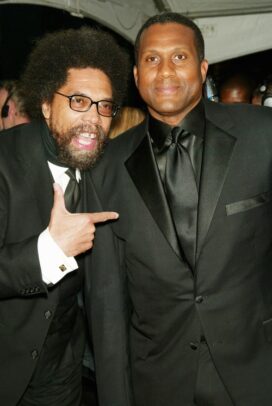 Tavis Smiley started hosting the late-night TV talk show Tavis Smiley on PBS in 2003, and the daily public radio show The Tavis Smiley Show on PRI in 2005. (His website calls him “The first American ever to simultaneously host signature talk shows on both public television and public radio.”) Smiley graduated from Indiana University in 1986 and then became an aide to Tom Bradley, the first African-American mayor of Los Angeles. In 1991 Smiley began doing regular commentary for a local radio station, which led to regular appearances with national radio host Tom Joyner. From 1996-2001, Smiley hosted BET Tonight on the Black Entertainment Network. Smiley is known for his energetic frank talk about race and politics; an African-American himself, he often interviews other black leaders and thinkers on his shows. He’s also the author of books including How to Make Black America Better: Leading African Americans Speak Out (2001) and the 2006 memoir What I Know for Sure: My Story of Growing Up in America. His company, The Smiley Group, manages his various efforts in broadcasting, exhibits, websites, films, and speeches.

Tavis Smiley was born to a single mother, Joyce Roberts. She later married Emory Smiley when Tavis was still a young boy… According to PRI, Smiley “has nine brothers and sisters, loves frozen yogurt from a shop called Pinkberry, is a fine Scrabble player and is a self-proclaimed political junkie.”

Something in Common with Tavis Smiley