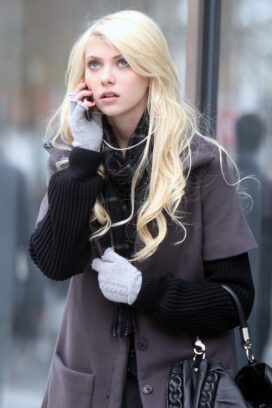 Taylor Momsen played Jenny Humphrey, the crafty and social-climbing young blonde on the prime-time soap opera Gossip Girl, from 2007-11. In later years she has been better known as the frontwoman for the rock band The Pretty Reckless.

Taylor Momsen got her start in the movies at age 7, when she landed the plum role of Cindy Lou Who in the live-action feature How the Grinch Stole Christmas (2000, with Jim Carrey as the Grinch). That led to kid roles in films like Spy Kids 2 (2002), Saving Shiloh (2006) and Underdog (2007), and a darker role in the Gus Van Sant skateboard film Paranoid Park (2007).

Her career really took off when she landed her Gossip Girl role as the not-as-rich, not-as-popular girl who wants desperately to rule the “in” crowd. Though the show was a success, and Momsen was too, she announced in 2011 that she would leave acting to focus on her music career.

Gossip Girl was based on the book series by the same title, written by Cecily von Ziegesar… Taylor Momsen’s younger sister, Sloane Momsen, appeared with her in the 2000 Vietnam War film We Were Soldiers; they played the daughters of Mel Gibson‘s character, Lt. Col. Moore… Another star of Gossip Girl was Leighton Meester.

Something in Common with Taylor Momsen