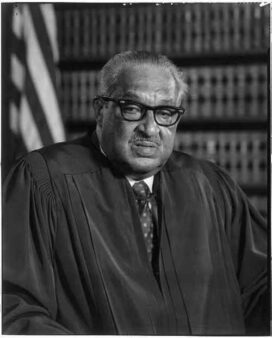 Attorney Thurgood Marshall led the civil rights case of Brown v. Board of Education of Topeka to a successful hearing at the Supreme Court of the United States in 1954. 13 years later, he became the court’s first Black justice.

A descendant of slaves, Thurgood Marshall graduated from all-Black Lincoln University in Pennsylvania in 1930, then received a law degree from Howard University in 1933. He opened his own law practice in Baltimore and became known as a lawyer who would speak up for the rights of Black people; this led him to a job with the National Association for the Advancement of Colored People (NAACP) in 1936.

He spent more than two decades with the NAACP, gaining his greatest fame for the case of Brown v. Board of Education, which lasted from 1952-54. When the Supreme Court ruled in 1954 that “Separate educational facilities are inherently unequal,” Marshall and the NAACP had won a great victory for civil rights.

Thurgood Marshall was nominated to the U.S. Court of Appeals (Second Circuit) in 1961, then appointed to the post of solicitor general in 1965 by President Lyndon Johnson. Marshall was appointed to the Supreme Court itself in 1967, where he served for 24 years before he retired in 1991. Marshall, known as a liberal throughout his tenure, was replaced on the court by conservative African-American Clarence Thomas (appointed by President George H. W. Bush). Marshall died of heart failure two years later.

Something in Common with Thurgood Marshall