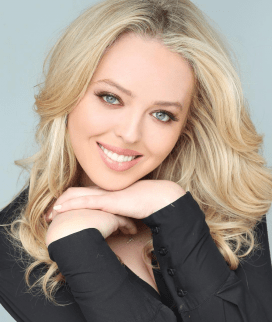 Tiffany Trump is the youngest daughter of former U.S. President Donald Trump. She is Trump’s daughter with his second wife, Marla Maples.

Maples and Donald Trump had an affair while he was still married to his first wife, Ivana Trump. Trump divorced Ivana, and Tiffany Trump was born to Maples in 1993. Donald Trump and Maples married two months after Tiffany’s birth, and their marriage lasted six years, until their divorce in 1999. After that marriage ended, Maples and Tiffany Trump moved to California, where Maples raised her daughter as a single mother.

Tiffany Trump attended the University of Pennsylvania, graduating in 2016 with a double major in urban affairs and sociology. Over the years she has dabbled in various media, working as an intern at Vogue magazine and releasing a one-off pop single, “Like A Bird,” in 2011. She was also seen in party photos of the so-called Rich Kids of Instagram (aka “The Snap Pack”), a group that included E.J. Johnson (son of NBA star Magic Johnson) and Gaia Matisse (descendant of artist Henri Matisse).

When Donald Trump won the Republican presidential nomination in 2016, Tiffany appeared with other family members at the convention and made campaign appearances. Donald Trump defeated Hillary Clinton in the general election on November 8, 2016, and served one term as president, from 2017-2021.

Tiffany Trump announced her engagement to Michael Boulos, described by The Washington Post as “heir to a multibillion-dollar Nigerian conglomerate,” on January 19, 2021. It was her father’s last day in office as U.S. president… Tiffany Trump’s middle name is Ariana… She is 12 years younger than her step-sister Ivanka Trump… In order, the children of Donald Trump are: Donald Trump, Jr. (born 1977), Ivanka Trump (b. 1981) and Eric Trump (b. 1984), all with Trump’s first wife, Ivana Trump; Tiffany Trump (b. 1993); and Barron Trump (b. 2006) with Trump’s third wife, Melania Trump.