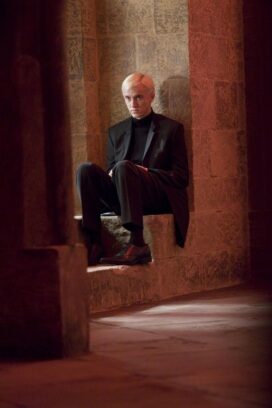 Tom Felton is the English actor known for playing Draco Malfoy, schoolboy foe of Harry Potter, in the movies based on J.K. Rowling‘s novels.

Tom Felton’s screen career began in TV commercials in 1995, and his big break came with the role of Peagreen Clock in the 1997 movie version of The Borrowers. He then had a role in the British TV series Second Sight (1999-2000, starring Clive Owen), and appeared as Jodie Foster‘s son in Anna and the King (1999, with Chow Yun-Fat).

Tom Felton’s other films include the monkeys-gone-wild action film Rise of the Planet of the Apes (2011), the marooned-at-sea drama Against the Sun (2014) and the combat-dog drama Megan Leavey (2017).

Tom Felton is a carp fishing (catch-and-release) enthusiast, according to news reports.

Something in Common with Tom Felton