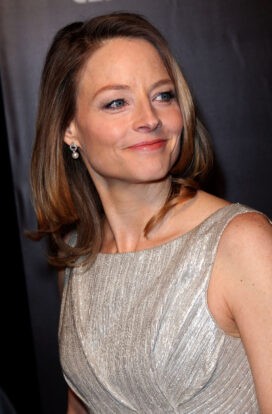 Brainy and beautiful, Jodie Foster is a four-time Oscar nominee; she has won twice, for The Accused (1988) and The Silence of the Lambs (1991, with Anthony Hopkins).

Foster got a start in movies in 1973 as a winsome Becky Thatcher in the Disney movie Tom Sawyer, but she really made her mark as the vulnerable teen prostitute “saved” by Robert DeNiro in the gritty 1976 film Taxi Driver.

In the early 1980s she was famous for being the object of obsession of John Hinckley, Jr.; Hinckley shot President Ronald Reagan in 1981 in a crazed attempt to win Foster’s favor. (The shooting echoed events in Taxi Driver.)

Foster took time off from acting to attend Yale, and she graduated in 1985 with a degree in English Literature.

As an adult she has developed into a thoughtful, handsome film actor who mixes thrillers with boutique dramas. Her many films include Bugsy Malone (1976), Sommersby (1993, with Richard Gere), the sci-fi film Contact (1997, with Matthew McConaughey), Anna and the King (1999, with Chow Yun-Fat), the gripping The Panic Room (2002), Spike Lee‘s Inside Man (2006, with Clive Owen) and Nim’s Island (2008, with child star Abigail Breslin).

Foster has also dabbled in directing: Little Man Tate (1991) was her feature debut.

Foster once played the Coppertone Girl in an ad for the tanning lotion… Her brother, Buddy Foster, was also a child actor… Foster has two sons: Charles (b. 1998) and Christopher, known as Kit (b. 2001). She has never spoken publicly about the identity of her sons’ father or fathers. She reportedly ended a long-term relationship with film producer Cydney Bernard in 2008.

Something in Common with Jodie Foster