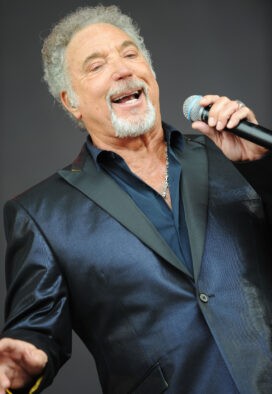 Tom Jones’s single “It’s Not Unusual” shot to #1 in 1965, making him a player in the swinging music scene of the 1960s. The same year he scored hits with the movie themes to What’s New, Pussycat? and the James Bond film Thunderball.

Tom Jones was a pure power singer, with a roguish hairy-chested appeal that was a particular hit with female fans. His act was ready-made for Las Vegas (where he became friends with Elvis Presley), and from 1969-71 he had his own TV show, This is Tom Jones, which aired both in the U.K. and America.

Jones’s star faded a bit in the 1970s, but in 1988 he reinvented himself, joining the cutting-edge band Art of Noise to remake the Prince hit “Kiss” into a hit of his own. Since then he has enjoyed decades of touring success, thanks to nostalgic fans and retrophiles and to his appearances (beginning in 2012) as a judge on the U.K. series The Voice.

Tom Jones was made an officer of the Order of the British Empire (OBE) in 1998, and knighted by Queen Elizabeth II in 2005 in honor of his services to music.

Tom Jones shares a name with the rascally title character of the 1749 Henry Fielding novel Tom Jones… Tom Jones performed as Tommy Scott early in his career, then shifted to the name under which he gained fame… Tom Jones married in 1957, when he was 16 years old; he and his wife had one son, born later that year, and remained married for 59 years, until her death in 2016… Tom Jones has a sizable role in Tim Burton‘s comedy Mars Attacks! (1996, starring Jack Nicholson).

Something in Common with Tom Jones