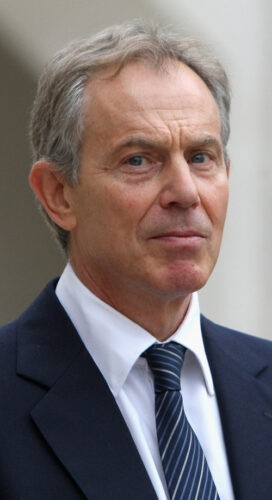 Prime minister's official site; see "facts" for bios of Blair and past PMs

Coverage of Blair, his cabinet, and UK politics in general

The Guardian covers Blair's retirement and years in power

Long student paper on Blair, covers the general themes of his life and politics

Tony Blair became the youngest British prime minister of the 20th century when he took office in 1997. He led Britain for a decade until stepping down in 2007.

Tony Blair was born in Scotland but spent much of his childhood in Durham, England. He studied law at Oxford and then practiced law until 1983, when he was elected as member of Parliament from Sedgefield. Blair was a member of the Labour Party, which at the time was dominated politically by the Conservative Party of Margaret Thatcher. Blair was soon a rising star of what became known as the “new Labour” movement, with positions more centrist on fiscal affairs and social issues like crime.

He became leader of the Labour Party in 1994, and three years later was named prime minister, replacing John Major, when Labour won a Parliamentary majority. Tony Blair was 44, making him the youngest British prime minister since Lord Liverpool in 1812. (Blair was often compared with the sitting U.S. president, Bill Clinton, who was 46 when he took office in 1993.)

Tony Blair was re-elected in Parliamentary elections in 2001 and 2005, although his latter years in office were marked by controversy over his partnership with American President George W. Bush and support for the war in Iraq. He stepped down as the prime minister on 27 June 2007 and was succeeded by the Chancellor of the Exchequer, Gordon Brown.

Tony Blair’s wife Cherie is also a lawyer. She is the daughter of the actor Anthony Booth and a distant relation to John Wilkes Booth, assassin of Abraham Lincoln… Tony and Cherie Blair have four children: Euan (b. 1984), Nicky (b. 1986), Kathryn (b. 1988) and Leo (b. 2000). According to Tony Blair’s official biography, Leo “was the first child born to a serving Prime Minister in over 150 years”… As a college student, Blair played in a rock band called Ugly Rumors.

Something in Common with Tony Blair