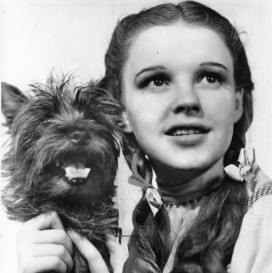 Born: 1900
Birthplace: Fiction
Best known as: Dorothy's dog in The Wizard of Oz

The Riveting Real Story of Toto

Fun backgrounder on Terry, who played Toto on film

Lots of details on the fictional critter

The Wonderful Wizard of Oz

Fan site for the movies and books

Filmsite: The Wizard of Oz

All about the famous film, including a full plot recap

Toto the dog is a character in L. Frank Baum’s 1900 fantasy story The Wonderful Wizard of Oz. Toto is the pet of Dorothy Gale, a Kansas farm girl who is blown “over the rainbow” into the magical land of Oz. Toto appeared in various “Oz” books written by Baum and others, but the dog became really famous after the release of the 1939 film The Wizard of Oz, starring Judy Garland as Dorothy. The film became a popular classic with baby boomers, thanks in part to annual showings on network television. Toto was immortalized in Dorothy’s famous line, “Toto… I have a feeling we’re not in Kansas anymore” and in the Wicked Witch of the West’s dire threat to Dorothy: “I’ll get you, my pretty, and your little dog, too!”

Toto’s breed is not specified in the Baum books, but in the 1939 movie he was played by a female Cairn Terrier named Terry… Toto is also the name of an American rock band and the nickname of Italian comic actor Antonio Clemente (1898-1967).