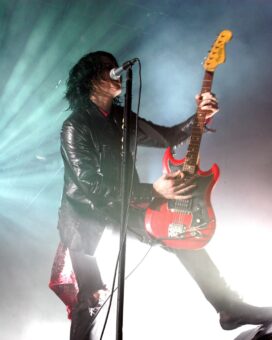 Trent Reznor is the multi-instrumentalist, singer and producer behind the industrial rock band Nine Inch Nails. Reznor grew up in small-town Pennsylvania, and after a year in college he made his way to Cleveland, Ohio. There he got his start in small bands and worked as an employee at a recording studio. Demos he’d recorded himself earned Reznor a record contract, and he released the first Nine Inch Nails record in 1989, Pretty Hate Machine. The record became a college radio hit, and the video for the single “Head Like a Hole” was an MTV favorite. Reznor’s talent for pop hooks buried in layers of electronic beats — and his use of goth-punk imagery — made him one of the most influential alt-rock stars of the 1990s. Since then, Trent Reznor has continued to record and tour (with a hired band) as Nine Inch Nails, while also working on video games and movie soundtracks. His other albums include The Downward Spiral (1994), The Fragile (1999), With Teeth (2004) and The Slip (2008). Soundtracks he’s been credited with include Oliver Stone‘s Natural Born Killers (1994), David Lynch‘s Lost Highway (1997) and David Fincher‘s The Social Network (2010). Reznor and Atticus Ross won an Oscar for their original score for The Social Network.

Trent Reznor’s song “Hurt” became a late-career hit for country music legend Johnny Cash in 2002… Trent Reznor has won two Grammys under the “heavy metal” category, on for 1992’s “Wish” and one for 1994’s “Happiness in Slavery.”

Something in Common with Trent Reznor