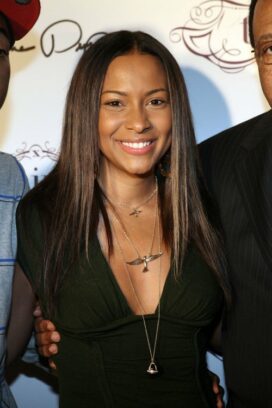 Valeisha Butterfield is the activist and public relations personality who was engaged to rapper The Game for a short time in 2006. The couple initially set March of 2007 as the date for their wedding, but then ended their engagement in June of 2006. Valeisha Butterfield graduated from Clark Atlanta University in 2000, and from 2004-09 worked on the staff of the Hip-Hop Summit Action Network, an advocacy group founded by music producer Russell Simmons under the umbrella of his Rush Communications business. In 2009 she became a Deputy Director of Public Affairs for the U.S. Department of Commerce. Valiesha Butterfield has also dabbled in acting, with uncredited roles in the films Remember the Titans (2000, starring Denzel Washington) and Road Trip (2000, with Tom Green. Butterfield’s father is G.K. Butterfield, a U.S. Congressman from North Carolina.

Valeisha Butterfield has one sister, Lenai… G.K. Butterfield was elected to represent North Carolina’s First District in 2004. He was re-elected in 2006, 2008 and 2010.

Something in Common with Valeisha Butterfield