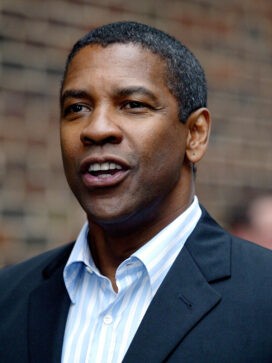 Denzel Washington’s Oscar nomination for his acting in 2021’s The Tragedy of Macbeth was his ninth, and his seventh as a lead actor.

Washington got his early break on TV, playing Dr. Phillip Chandler in the television drama St. Elsewhere (1982-88). He received critical praise for his role in the movie A Soldier’s Story (1984), and was nominated for a supporting actor Oscar for Cry Freedom (1987).

A bankable, African-American leading man, Denzel Washington worked steadily throughout the 1990s in big-budget thrillers, comedies and dramas, including Philadelphia (1993, with Tom Hanks), Crimson Tide (1995, opposite Gene Hackman) and The Preacher’s Wife (1996, with Whitney Houston).

Washington has appeared in dozens of films, including Antwone Fisher (2002), The Manchurian Candidate (2004, co-starring Meryl Streep and directed by Jonathan Demme), Spike Lee‘s Inside Man (2006), Ridley Scott‘s American Gangster (2007) and The Book of Eli (2010).

Washington has also directed films, including Antwone Fisher and Fences (nominated for best picture of the year in 2017).

Washington was the first African-American to win a best actor Oscar since Sidney Poitier in 1963… 2002 was the first year that African-Americans won both the best actor and best actress Oscars; Washington won for Training Day and Halle Berry won for her role in Monster’s Ball… Washington has collaborated several times with director Spike Lee; their films together include Mo’ Better Blues (1990), Malcolm X (1992, based on the life of civil rights leader Malcolm X) and He Got Game (1998)… His son, John David “J.D.” Washington, was a football star at Morehouse College and plays for NFL Europa’s Hamburg Sea Devils.

Something in Common with Denzel Washington