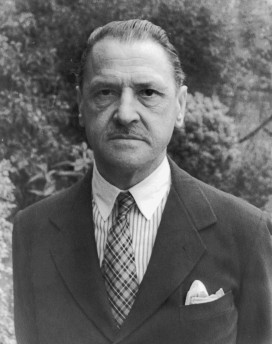 W. Somerset Maugham was a prolific and popular writer of plays, novels and short stories during the first six decades of the 20th century. His passionate semi-autobiographical novel Of Human Bondage (1915) is probably his most famous work.

Somerset Maugham’s parents both died before he turned 11, and he was raised by his uncle, the Vicar of Kent. At age 16 he traveled to Germany to study, and upon his return to Britain he studied to become a doctor. His experiences as an intern in the London slums led him to write Liza of Lambeth (1897). The novel was a success and Maugham quickly traded the surgeon’s knife for the writer’s pen. Maugham wrote criticism and essays as well as plays and novels, and he soon became one of Britain’s most popular authors; in 1908 he had four plays running simultaneously on London stages. Novels like The Magician (1908), The Moon and Sixpence (1919, based on the life of painter Paul Gauguin) and Cakes and Ale (1930) were popular hits and (mostly) critically respected.

In 1928, Maugham moved permanently to the luxurious Villa Mauresque on Cap Ferrat in the south of France. In the second half of his career, Maugham became known as a master of the short story. He travelled extensively and based many of his tales in exotic locales, particularly the South Seas. “Rain,” the tale of a straitlaced missionary who becomes obsessed with reforming a prostitute, is probably his best-known short story. Among his many other books are the novel The Razor’s Edge (1944) and the essay collection A Writer’s Notebook (1949).

Somerset Maugham married the former Gwendolyn Maude Syrie Barnardo in 1917; they had one daughter, Elizabeth (or Liza, 1915-1981) and were divorced in 1929. Maugham was homosexual and at the time of his marriage had already embarked on an affair with Gerald Haxton, who became his secretary and longtime companion. After Haxton’s death in 1944, Maugham began a relationship with Alan Searle, who also served as his secretary… Somerset Maugham worked in the British intelligence department during World War I, and based his 1928 novel Ashenden on his experiences. The book is considered a forerunner to many later spy novels of the 20th century, including the James Bond stories of Ian Fleming… Somerset Maugham had a mild stammer which remained with him throughout his life; the club foot of Philip Carey, the young protagonist of Of Human Bondage, is thought to be a sort of stand-in for Maugham’s stammer…The Razor’s Edge was made into a 1946 feature film starring Tyrone Power and a 1984 feature film starring Bill Murray… The newspaper The Australian reported in 2010 that Maugham “has had more works (98) adapted for film and TV than any other author.” Indeed, the Internet Movie Database lists over 140 different productions based on Maugham stories.

Something in Common with W. Somerset Maugham