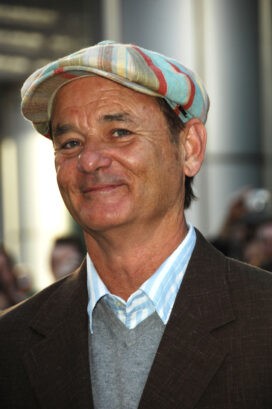 Ironically insincere and yet somehow soft-hearted, Bill Murray is the best-known star to emerge from the cast of TV’s Saturday Night Live.

On SNL from 1977-80 he created the cheesy lounge crooner, Nick, and other lovably smarmy characters, some of which were holdovers from his days with the National Lampoon Radio Hour.

Murray then starred in two of the top-grossing comedies of the 1980s: playing a woolly-headed groundskeeper in Caddyshack (1980, co-written by Douglas Kenney) and a slick-talking investigator in Ghostbusters (1984, with fellow SNL alumnus Dan Aykroyd).

He also took more serious roles, playing a mobster in Mad Dog and Glory (1993, with Robert DeNiro) and an eccentric businessman in Wes Anderson’s Rushmore (1998).

He was nominated for a best actor Oscar for his role as a jet-lagged movie star in Tokyo in Sofia Coppola‘s film Lost in Translation (2003), and has since been considered a funny guy who has legitimate acting talent. His other films include Anderson’s movies The Life Aquatic with Steve Zissou (2004), The Darjeeling Limited (2007), Fantastic Mr. Fox (2009) and Moonrise Kingdom (2012), as well as the animated features Garfield (2004) and The Jungle Book (2016).

Murray is an avid golfer and a particular fan favorite at the annual AT&T Pebble Beach Pro-Am.

Murray’s brother Brian Doyle-Murray is also an actor and writer, and was one of the co-writers of Caddyshack.

Something in Common with Bill Murray