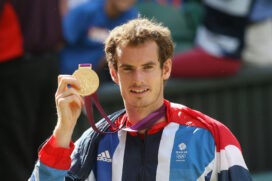 Name at birth: Andrew Murray
Andy Murray is the tennis player who in 2013 became the first Briton in 77 years to win the men’s singles at Wimbledon.
Andy Murray grew up in Dunblane, Scotland, where he began playing tennis at age three; his mother, Judy Murray, is a tennis coach who in 2011 was named captain of Great Britain’s Federation Cup team. Andy Murray was nine years old when the infamous Dunblane Primary School massacre happened on 13 March 1996: a gunman entered the school and killed 16 children and one teacher before shooting himself to death. Murray was at the school that day but was not injured. In his teens he excelled in both tennis and soccer, but chose tennis and at age 15 moved to Barcelona to train.
In 2004, at age 17, he won the U.S. Open Juniors division, and the BBC named him its Young Sports Personality of the Year in 2004. The next year he turned pro and began his climb up the world rankings. A lean right-hander with a big serve, he won his first ATP title at the SAP open in San Jose in 2006. Early on he gained a reputation as a talented hothead who couldn’t quite control his emotions, and he wasn’t always popular with fans. (“I have never liked losing. When I was a little boy I would overturn the Monopoly board in a rage if I was losing,” he said at the start of his 2008 autobiography, Hitting Back.) But the talent was undeniable: He made it to the semifinals of 10 different major tournaments from 2008-2012, reaching the finals in four but winning none of them.
Over time both he and his game matured, and in 2012 he broke through by winning a gold medal at the Summer Olympic Games in London and then the men’s singles title at that year’s US Open. The next year he thrilled British fans by winning the men’s singles title at Wimbledon, beating Novac Djokovic 6-4 7-5 6-4 to become the first British men’s champion since Fred Perry in 1936. He was named an Officer of the Order of the British Empire (OBE) by Queen Elizabeth II on 29 December 2012. He won Wimbledon again in 2016, defeating Milos Raonic 6-4, 7-6 (7-3), 7-6 (7-2).

Andy Murray is 6’3″ tall (190 cm) and his playing weight is 185 pounds, according to his biography from the ATP Tour… Murray’s brother, Jamie Murray (born 1986) is also a professional tennis player; the two brothers have, on occasion, teamed up for tournament doubles… The only other Scotsman to win the men’s singles title at Wimbledon was Harold Mahony in 1896… Tennis great Ivan Lendl began coaching Murray at the start of 2012… Some sources say Andy Murray was born in Glasgow, but his official site gives Dunblane as his birthplace.

Something in Common with Andy Murray