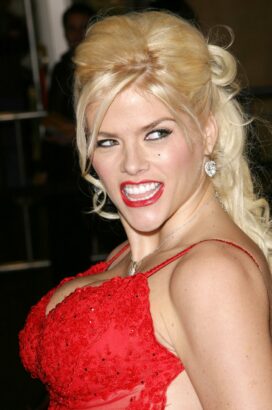 Anna Nicole Smith was a zaftig blonde bombshell whose career as a tabloid celebrity began when she posed naked for Playboy magazine in 1992 and ended with her untimely death in 2007.

Anna Nicole Smith was born as Vicki Lynn Hogan and raised in Texas. Her parents divorced when she was a baby, and she dropped out of high school in her sophomore year. She married when she was 17, divorced at age 19, and managed to start working as a stripper and part-time model. That led to her life-altering appearance as Playmate of the Month in the May 1992 edition of Hugh Hefner‘s magazine Playboy, and her selection as Playmate of the Year in 1993.

Suddenly a name, she starred in a series of glossy ads for Guess? clothing, and her busting-out-all-over appeal made her a popular pinup in the early days of the Internet. Then Smith became the stuff of talk show one-liners after she married 89-year-old oil tycoon J. Howard Marshall in 1994. He died the next year, leaving Smith to battle his family for control of his fortune.

The legal wrangling seemed finished in 2002, when federal judge David Carter awarded Smith $88.5 million as her share of Marshall’s estate, but later legal challenges kept the case alive. Smith’s well-known battles with her weight also led to her role as a spokeswoman for TrimSpa diet products. Smith also starred in the The Anna Nicole Show, a “reality” TV series about her life which aired from 2002-03. The show cemented her reputation as a celebrity more famous for being a celebrity than for anything else.

Smith gave birth to a daughter, Dannielynn Hope, in September of 2006; the event was marred when Smith’s 20-year-old son Daniel died suddenly while visiting her in the hospital three days later. Legal battles involving the paternity of her daughter followed her into 2007, and she was also named in a class-action lawsuit against TrimSpa.

Anna Nicole Smith was found unconscious in her hotel room in Hollywood, Florida on the afternoon of February 8, 2007 and rushed to a hospital, where she was pronounced dead. The medical examiner’s report eventually blamed Smith’s death on a fatal combination of the sedative chloral hydrate and several other prescription drugs. Two months after her death, a court-ordered DNA test showed that Smith’s former boyfriend, Larry Birkhead, was the father of Dannielynn.

Anna Nicole Smith’s daughter was born on September 7, 2006 in Nassau… Anna Nicole Smith and her longtime attorney Howard K. Stern held a “commitment ceremony” in the Bahamas on September 28, 2006, but the legal status of that relationship was questioned. Howard K. Stern is no relation to the radio host Howard Stern… Daniel Smith (born January 22, 1986) was Anna Nicole’s son with her first husband, Billy Smith. The couple were married from 1985-87… After an autopsy, Daniel Smith’s death was attributed to a lethal and accidental combination of methadone and two antidepressants… Anna Nicole Smith appeared with O.J. Simpson in the 1994 comedy The Naked Gun 33 1/3.

Something in Common with Anna Nicole Smith