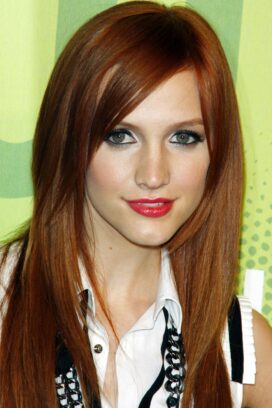 Ashlee Simpson is the husky-voiced singer of the pop single “Pieces of Me,” but she’s nearly as famous for being the younger sister of singer Jessica Simpson. Ashlee Simpson studied dance as a child and got her start in show business backing up her sister on stage. By 2002 Ashlee was a semi-celebrity in her own right, appearing as a regular cast member on the television series 7th Heaven and making her film debut in the 2002 comedy The Hot Chick. In 2004 she appeared on the MTV reality show The Ashlee Simpson Show as a prelude to releasing her first pop album, Autobiography. She’s since made appearances on screen and stage and has released more records, including I Am Me (2005) and Bittersweet World (2008), both of which sold modestly and got little love from the critics. Ashlee Simpson married bassist Pete Wentz on 17 May 2008; he was formerly with the band Fall Out Boy. Simpson filed for divorce in January of 2011.

Ashlee Simpson and Pete Wentz have a son, Bronx Mowgli Simpson, who was born on 20 November 2008. Mowgli is a character in the Jungle Book stories of Rudyard Kipling… To separate herself from her sister’s image, Ashlee Simpson often dyes her blonde hair brown… “Pieces of Me” was co-written by American Idol judge Kara DioGuardi.

Something in Common with Ashlee Simpson