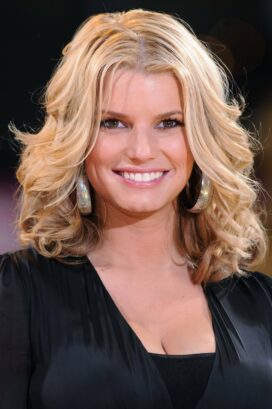 Jessica Simpson is a singer and actress who has built a career on her public persona as a friendly and not-too-bright pop celebrity. She got her start singing on the Christian youth conference circuit, then became a mainstream favorite with the 1999 pop album Sweet Kisses. That album featured her first hit single, “I Wanna Love You Forever.” At the time, Jessica Simpson was often compared (or confused) with fellow singing teen heartthrobs Britney Spears, Christina Aguilera and Mandy Moore. But in 2003 she starred in her own MTV reality show, Newlyweds: Nick and Jessica, which documented her first year of marriage to fellow pop star Nick Lachey. The role made her a star and, at the same time, cemented her reputation in the public mind as a cheerfully dumb blonde. In 2005 she played the voluptuous Daisy Duke in a feature film remake of the 1970s TV series The Dukes of Hazzard. She and Lachey were divorced in 2006, and in 2010 she became engaged to NFL tight end Eric Johnson. Their first child, a daughter named Maxwell Drew Johnson, was born on 1 May 2012. She became pregnant again soon after, and the couple’s second child, a son named Ace Knute Johnson, was born on 30 June 2013. Jessica Simpson’s younger sister, Ashlee Simpson, is also a singer who has appeared in her own reality show on MTV.

Maxwell Drew Johnson weighed 9 pounds, 13 ounces at birth and was 21.75 inches long… Jessica Simpson and Nick Lachey were married on 26 October 2002; the couple announced their separation in November 2005 and divorced the next year… Nick Lachey became a star with the pop group 98 Degrees… Jessica Simpson dated Dallas Cowboys quarterback Tony Romo before she became engaged to Eric Johnson… Johnson played college football at Yale and played pro ball for the San Francisco 49ers (2001-06) and the New Orleans Saints (2007)… Besides Sweet Kisses, Simpson’s other albums include Irresistible (2001), In This Skin (2003), Do You Know (2008) and Happy Christmas (2010).

Something in Common with Jessica Simpson