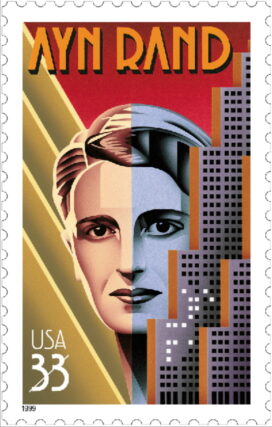 Ayn Rand the author is famous for her novels The Fountainhead and Atlas Shrugged.

Ayn Rand the “philosopher” is known for what came to be called Objectivism: the idea that the individual should be preeminent over the state and collective action, and that enlightened selfishness and capitalism are the purest forms of individual freedom.

Born and educated in Russia, Ayn Rand moved to the United States in 1926, landing in Hollywood to begin a career as a screenwriter. In 1932 she sold her first screenplay, but soon turned to writing novels. Her novel The Fountainhead was published in 1943 and became her best-known work.

The story of Howard Roark, a principled architect whose brilliant designs and pure ideals were sneered at and blocked by the cultural elites, it was an early template of the Objectivist ideal.

Still occasionally working as a screenwriter, Rand moved to New York City in 1951 and published Atlas Shrugged in 1957. That book introduced John Galt, a genius who organizes a strike of great creative thinkers and capitalists to “stop the motor of the world” and prove his point that collectivism is corrupt.  Rand’s ideas were both popular and controversial in an era when communism was still a major force in world affairs.

Ayn Rand was in the news again in the early 21st century, as an inspiration to rightwing American candidates suggesting that capitalists and industrial leaders should “go Galt” and leave liberals and collectivists to suffer.

Alan Greenspan, the head of the Federal Reserve from 1987-2006, was a friend and avowed admirer of Ayn Rand… The 1949 movie version of The Fountainhead starred Gary Cooper as Howard Roark.

Something in Common with Ayn Rand