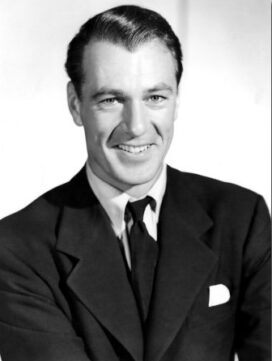 Gary Cooper started as an extra in westerns in the 1920s and went on to become one of Hollywood’s greatest stars, known for his Oscar-winning roles in Sergeant York (1941) and High Noon (1952). Gary Cooper spent his childhood in Montana and England (his parents were British) and went to college in Iowa. In 1924 he ended up in Los Angeles, looking for work as a newspaper cartoonist. When that didn’t pan out he found work as a Hollywood extra and bit player; he had his first substantial role in The Winning of Barbara Worth (1926). Tall and handsome, Cooper had a shy smile and slow speech which made him a the very definition of the stoic hero of the American west, but he was equally successful at romantic comedy, especially in Frank Capra‘s Mr. Deeds Goes to Town (1936) and Meet John Doe (1941, with Barbara Stanwyck). His other films include A Farewell to Arms (1932), The Pride of the Yankees (1942, as Lou Gehrig) and Along Came Jones (1946). When he was given a special Oscar in 1961, his friend and fellow star Jimmy Stewart accepted the award and revealed that Gary Cooper was dying of cancer. Cooper died less than a month later.

Gary Cooper was friends with author Ernest Hemingway and starred in two film adaptations of Hemingway’s works, A Farewell to Arms and For Whom The Bell Tolls.

Something in Common with Gary Cooper