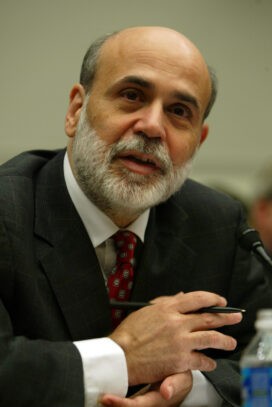 Ben Bernanke became chairman of the Federal Reserve Board in January of 2006. As chairman, he leads a board of seven governors of the Federal Reserve System (often called simply “the Fed”), which sets national monetary policy and serves as the central bank of the United States. Bernanke grew up in South Carolina and earned a bachelor’s degree in economics from Harvard (1975) and a PhD in economics from the Massachusetts Institute of Technology (1979). He was a professor of economics at Stanford University from 1979 until 1985, when he moved to Princeton. Throughout the 1980s and 1990s he became increasingly involved in the Federal Reserve System, serving as a visiting scholar and academic advisor to several regional reserve banks. He remained at Princeton until 2002, when he left to become a Federal Reserve governor. In June of 2005 he was appointed by George W. Bush to be Chairman of the President’s Council of Economic Advisers. When longtime Federal Reserve Board chairman Alan Greenspan retired in January of 2006, Bernanke became the new chairman. Bernanke has a 14-year term as a member of the Fed board, which will last until 2020. His first four-year term as chairman was extended in 2010, when he was sworn in for the second four-year term on 3 February 2010. His books include Essays on the Great Depression (2000), and the textbooks Macroeconomics (1992, with Andrew B. Able) and Principles of Economics (2001, with Robert H. Frank).

Bernanke’s official job title is Chairman of the Board of Governors of the Federal Reserve System… According to his Federal Reserve Board bio, Bernanke was born in Augusta, Georgia, but “grew up in Dillon, South Carolina.” Augusta is the site of the annual major golf tournament known as The Masters… Bernanke married the former Anna Friedmann on 29 May 1978. They have two children: Joel (b. 1982) and Alyssa (b. 1986)… Bernanke won the South Carolina state spelling bee at age 11, according to a 2005 article in The Washington Post.

Something in Common with Ben Bernanke