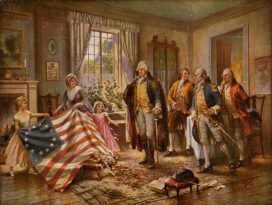 According to patriotic legend, Betsy Ross sewed the first American flag at the request of George Washington. No firm evidence exists to prove the story; the legend is based on statements made by Ross’s grandson, who said Ross told him the story on her deathbed. Ross definitely was a seamstress and upholsterer in Philadelphia at the time of the Continental Congress, and her role in the creation of the flag has been widely accepted as fact. Her first husband John Ross, a member of the Pennsylvania militia, was killed in an explosion while guarding an ammunition dump. Her second husband, Captain Joseph Ashburn, was captured at sea during the war and died in a British prison; she later married another friend, John Claypoole, with whom she had five daughters. She died in Philadelphia in 1836.

Something in Common with Betsy Ross