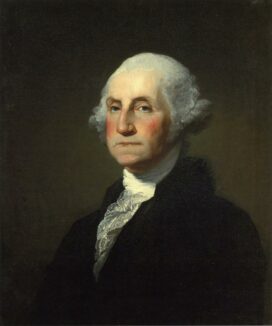 George Washington is called “the father of his country” for his crucial role in fighting for, creating and leading the United States of America in its earliest days.

George Washington was a surveyor, farmer and soldier who rose to command the Colonial forces in the Revolutionary War. He held the ragtag Continental Army together — most famously during a frigid encampment at Valley Forge, Pennsylvania during the winter of 1777-78 — and eventually led them to victory over the British.

His success in the war made him a tremendously popular figure in America even after he retired to his farm at Mount Vernon in 1783. He was the natural choice to serve as the country’s first president in 1789 after the new United States Constitution was ratified. He served two terms, refused a third, and returned to his Virginia farm.

In 1798, George Washington was again commissioned as Commander in Chief of the Army, a title he held until his death 18 months later. He was succeeded as president by John Adams.

George Washington married the widow Martha Dandridge Custis in 1759, and she was First Lady during his years as president. They had no children together, but George Washington adopted Martha’s children John and Martha.

President Washington had false teeth but, contrary to popular rumor, they were not made of wood. According to the Mount Vernon official site, George Washington’s dentures “were probably more uncomfortable than wood. They were made of cow’s teeth, human teeth, and elephant ivory set in a lead base with springs that allowed him to open and close his mouth”… The story of George Washington chopping down a cherry tree is also not true; it was invented by an early biographer of Washington, Parson Mason Weems…George Washington was land-rich but often cash-poor, and had to borrow money in order to get to his first inauguration… George Washington is no relation to George Washington Carver, the great botanist of the early 20th century.

Something in Common with George Washington