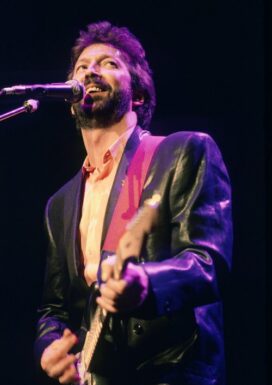 Eric Clapton earned the nickname "Slowhand" while playing guitar for a succession of hot 1960s bands: The Yardbirds, John Mayhall and the Bluesbreakers, Cream, Blind Faith, and Derek and the Dominoes. While with Derek and the Dominoes, he recorded the rock classic "Layla." During the 1970s Clapton played as a guest with some of the greatest performers of the era, and had solo hits in "After Midnight" and a cover of Bob Marley’s "I Shot The Sheriff." In the 1980s and ’90s, Clapton met with even more critical and popular success, and had a string of hits, including the top single "Tears in Heaven," about the death of his young son.

Clapton has been inducted three separate times into the Rock and Roll Hall of Fame… Another guitarist who played with the Yardbirds was Jimmy Page, later of the supergroup Led Zeppelin.

Something in Common with Eric Clapton