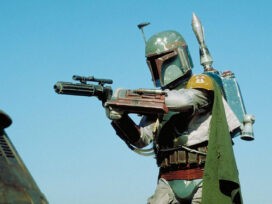 Born: 1978
Birthplace: The Movies
Best known as: The Star Wars bad guy in the T-shaped visor

Much simpler fan page, with just the sturdy basics

Bounty hunter Boba Fett is a popular villain in the long-running Star Wars movie saga created by George Lucas. Fett’s first film appearance was in The Empire Strikes Back (1980), where he helped nefarious Darth Vader capture Han Solo (Harrison Ford) and then claimed Solo’s frozen body for transport to the lair of Jabba the Hutt. Fett wears a jet backpack and a battered green helmet with a distinctive T-shaped visor. Though his movie screen time is rather small, Boba Fett has played a larger role in the novels and comics spawned by the Star Wars films.