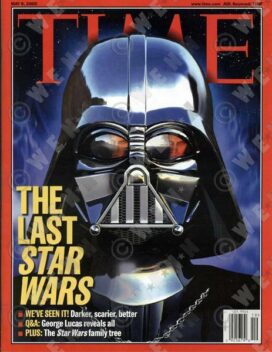 According to the Star Wars storyline, Darth Vader began life as Anakin Skywalker and was trained by the Jedi master Obi-Wan Kenobi before being seduced by the “dark side” of the mystical Force. He became a servant of the nefarious Emperor Palpatine and used the powers of the Force for evil. The original Star Wars trilogy tells of Vader’s battle against Luke Skywalker (played by Mark Hamill) and the Rebel Alliance led by Princess Leia (Carrie Fisher). That original Vader was played on screen by actor David Prowse and voiced by James Earl Jones. (In the 1980 sequel The Empire Strikes Back, Luke Skywalker is revealed to be Darth Vader’s son, when Vader delivers his famous line “I am your father!”)

In Rogue One, Darth Vader was played onscreen by 6’7″ British actor Spencer Wilding; David Prowse was still alive, but at age 81 a little too old to take on the role. James Earl Jones again did Vader’s voice. Vader’s busted-up helmet (but not Vader himself) appeared in Star Wars: The Force Awakens (2015), in which he is idolized by his disciple (and grandson) Kylo Ren.

The Darth Vader music cues were by composer John Williams, who also wrote a famous theme for the shark in Jaws (1975)… Obi-Wan Kenobi was played by Alec Guinness in the first three Star Wars films, and by Ewan McGregor in later sequels… Strange but true: a carving of Darth Vader was placed on the northwest tower of Washington National Cathedral. It was placed there as the result of a design competition among children to design decorative sculptures for the Cathedral.